Muay Thai, translated as “Ancestral Boxing”, is the predecessor of Muay Thai. His age makes it very difficult to trace through history. The origin of Muay Thai is confused with the origin of the Thai people. Archaeological evidence suggests that a martial art similar to Muay Boran has been practiced in Southeast Asian countries for about 2,000 years. The creation and training in this art was probably developed for ancient military purposes. Fights that used this style became very popular; such struggles became known as Dhoi Muay, a term now used for boxing and pugilism in general. 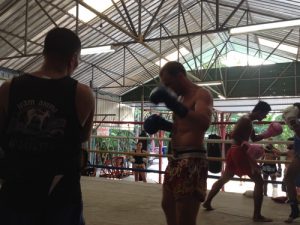 Muay Boran was divided into Muay ThaSao (North), Muay Korat (East and Northeast), Muay Lopburi (Center Region), and Muay Chaiya (South). There is a phrase in Thai that says “Korat Perforator, Lopburi Wit, Chaiya Posture plus Thasao Rapido”. The focus of Muay Korat is strength. It was called that because it could defeat a buffalo in one fell swoop. There are several versions on the origin of Muay Thai which are good for health. The most accepted by most Muay Thai masters.
Muay Thai today
Muay Thai is currently practiced as a sport in many countries of the world. Its global diffusion has made it one of the most widespread contact sports and its number of practitioners does not stop growing. The best Khai Muay (exercise camps) are in Thailand, but currently other countries can compete on equal terms, especially in the higher weight categories. The Netherlands is the birthplace of many famous fighters such as Ernesto Hoost, Peter Aerts or the legendary Ramon Dekkers (8 times world champion) and many more .A legend in Thailand is the champion Buakaw by Pramuk a fighter very characteristic for his speed and legs, he says that his kick is worse than the “kick of a horse”.