Clinching is the special position of Muay Thai which involves both the opponents locked together arms in arms with their bodies against each other. It is a common thing in a bout of Muay Thai. Here are some common mistakes rookies make while clinching-
1. Using Brute Force- While the gyms in the West now acknowledge the importance of Muay Thai, the use of the art of clinching is still barely taught there. In the name of clinching the western folks are taught to grab the opponent’s neck and use their force to clinch him. In Thailand, this can easily fail with the use of a little technique. 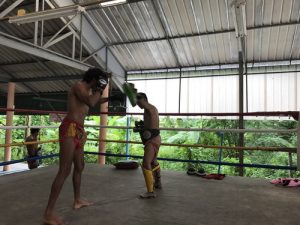 2. Use of Only the Hands- The easiest sign to know that the person is a rookie in training is that he or she tries to rely on both their hands, and all they do is try to grab your neck with them. This technique never works with an experienced clincher, and if you try this against them you’ll be leaving your guard open, thus giving them the opportunity to get hits on you.
3. Going for the Knee- Most rookies think that the key to a healthy clinch is always going for the knee as and when the opponent swings it. If your opponent is experienced, he will use your range to get hits on you, because if you try this when their knee is on the swing you’ll be in their range. Instead try to clinch the opponent man or woman at a safe punching range.
4. Forgetting to Knee While Getting Clinched- When your opponent clinches you, it is necessary that you do not forget to use your knees so as to get yourself out of their grip. The key to winning in Muay Thai is that you score more points in the clinch than your opponent. For a better knee movement, we recommend you wear shorts, and for a better grip, gloves are your best bet.
5. Bending Down- It is the simplest of mistakes. When you bend down, you expose a wide area to your opponent which he or she can easily grab, and when your head is down, it is Quite tough to use your hands the way they’re meant to be. Always try and keep your head up while in a bout.
Always remember to train under an experienced trainer so that you can learn the defects of your clinching position more personally and specifically. That is how you will improve your game.

Muay Thai is a martial art that has been developed hundreds of years ago and is an ancient way of exercising power, total efficiency, and crude simplicity. It is based on a combination of kicks, punches, knees, and elbows with flexibility and grace. It is also known as the “Art of Eight Limbs” and is an excellent martial art which originated in Thailand. 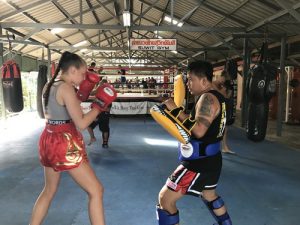 Many martial arts have been rendered as a sport, and Muay Thai knew as Thai Boxing is also a popular sport now. Due to its effective striking techniques and robust training regimes, the one who plays this martial art has an extraordinarily flexible and sturdy body. This art utilizes fists, feet, elbows, knees, and shins (as well as the head traditionally, though this has been removed from modern competition).
In this form of martial art, there are two main competitors in a ring, and the ultimate motto is for one fighter to emerge victorious at the contest by knocking the other opponent. The opponent gets stopped by the referee as unfit in health to carry on (knock-out) or winning on points. In Must Thai, all the fighters make use of their fists, feet, shins, elbows, and knees to try and win the fight and them also make use of grappling teaming up with clinches occasionally. Muay Thai is exceptionally combative, and it involves a lot of physical wear out, the fighters need a lot of skill to win the higher level competitions.
Before every match, all the boxer pays homage under the heritage. Once homage service is done then the fight is ready to begin, and here both fighters shake hands. Muay Thai bouts have 5 rounds each of 3 minutes each, with a two minute rest period in between each.