Muay Thai is an international martial combat sport. It was originated from the land of smiles known as Thailand. This was decades ago and holds a very special place in the hearts of the local people there. Previously women were not allowed to play the sport in Thailand. The reason was that the Buddhist Monks used to bless the rings before every fight and as the women were not allowed to come in contact with the monks, they were barred from the matches. But since the sport started to gain recognition outside Thailand and that too with women players, Thailand government removed the ban from Muay Thai. Since then even Thailand women were allowed to play the sport. 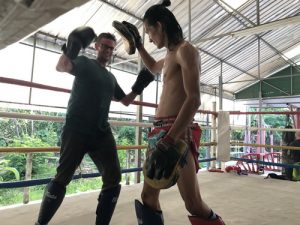 Muay Thai has many training centres and camps across the globe. These camps have state of the art facilities for its aspirants. But the one thing that is missing in these camps is the atmosphere and the ambience which is provided by Thailand training camps only. The origin makes a lot of difference for training. The game is inculcated deep within the aspirant for them to learn the sport with sheer dedication and concentration.
Women players from across the world inspire the women to join Muay Thai. This sport helps the players to stay fit and creates concentration and physical fitness as well. The health is always improved of the players as the game knows how to keep the players on their toes. It is a great way to loss weight and women players are attracted for this reason as well. People from all over the world come to Thailand to get trained on Muay Thai. Muay Thai trainers in Thailand are well versed with the common language known as English and can train the students with the same rigour that is needed for the sport.