Muay Thai is a modification or revision of the conventional battlefield art of Muay Boran or ancient boxing. It is well-known as one of the most physically demanding and lethal martial arts in the world. This type of ancient boxing had been started to prepare the soldiers in hand to hand fight like elbowing, punching and kicking methods, apart from basic armed combat. King Rama V was the man who had started elevating this conventional art by arranging various tournaments. During his epoch, many Muay luangs, also known as royal boxing centers were established for offering ample training to the young stars. The age of King Rama V is regarded as the golden era of Muay Thai, as it became a crucial part of the core curriculum of the physical education teachers’ training school as well as at Prachufachomktao Royal Military Cadet School. 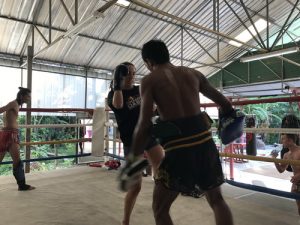 Sarama is the regular music that goes together with Muay Thai matches as well as the pre-fight rituals. The music is to build the ambiance of a Muay Thai match and encourages the fighters for stricter combat. Muay Thai is the culture and national sports of Thailand. It is the most favorite and growing up martial art of the recent time. It is indisputably the king of all Martial Arts. Thailand is the home to Muay Thai, and you can witness a fantastic display of eminent fighters in their act at Lumpini Stadium and Rajadamnern Stadium. Visitors from all over the world pay a visit to these places during their vacation in Thailand. There is an excellent amount of eagerness in martial art lovers in the training of Muay Thai. Every position, movements, and characteristic of Muay Thai is being advanced under the leadership and supervision of great grand masters of the place. The Muay Thai training camps are organized all over the world to enhance its repute among all.