If you want to be a good fighter in Muay Thai, your defence needs to be on par. Here are 5 good tips which will help improve your defence considerably

1. Develop your Reflexes- You must be knowing how to parry an attack, but having a timing equivalent to that is also very important. To develop such reflexes, the best way is to keep taking part in bouts so that you develop the necessary skills for that. 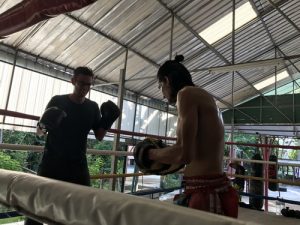 3. Head Movement- The head movement is very important, and one must never forget how to learn to dodge attacks and duck. To work on head movements, one should also train in other martial arts such as boxing.

4. Effective Teep- a tero is equivalent to Muay Thai what a jab is to boxing. An effective tero helps keep opponents at bay and knock them off balance. An effective tero cam be developed via shadow boxing, bag work, pad rounds and in sparring.

5. Developing a Strong Guard- At times you won’t be able to keep yourself out of situations where you will be attacked. This is when you can use your guard to stop opponent attacks and reduce the damage. A guard can be developed using special drills while sparring.

Conclusion- Defense is an important part of a bout. But one mustn’t completely depend on defence. Instead defense must be used as a part of a strategy which also gives equal importance to attack.